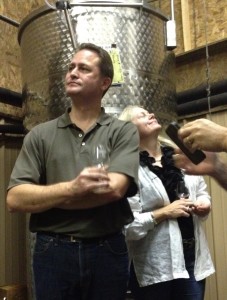 We believe in the power of dreaming, faith in God, and hard work.

Wine has been an avid shared hobby of Krista (KK) and Scott since before they each met each other. With some newly acquired education for KK, dreams for farming a vineyard and opening a rural winery, they purchased a 25 acre farm and relocated from East Central Dallas to rural Grayson County, Texas in December 2015. They’re located north of the towns of Sadler and Whitesboro in North Texas (In between Denison/Sherman and Gainesville). A quick hour-ish drive north from Dallas, they are pleased to be located in the Texoma A. V. A. (American Viticulture Area) and look forward to producing wines made from 100% Texas grapes.

She and Scott became grape farmers beginning with a Test Vineyard of 125 grapevines (5 varieties: Merlot, Syrah, Viognier, Alvarinho and Tempranillo) in Spring 2016. In 2017, 2018 and 2020 they planted full acres of Tempranillo.  75 additional vines  have  been  added  to  the  test  vineyard  as  well (Garnacha Negra, Graciano and Viura). 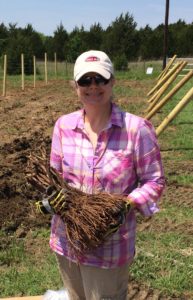 Winemaking and expanding the vineyard together over the next 8+ years is their life’s next chapter. They aim to begin soft openings for their winery in either late 2023 or 2024. In the mean time, Krista is incorporating tidbits of viticulture, enology, cuisine, and hospitality with her everyday life. She serves on the the Grayson College Board of Trustees and the Advisory Board for the T.V. Munson Enology & Viticulture Center which houses the Grayson College programs for wine making and grape growing.

In October 2014, Krista and Scott joined the Texas Wine and Grape Growers Association (TWGGA) as “Friend of” members and attended Grape Camp in Fredericksburg that November. In 2016, they were thrilled to upgrade their membership to Small Vineyard Members. Recently she’s joined the Education and Conference Committee and Strategic Planning Committee for TWGGA.

In January 2015, Krista began her studies at the Grayson College Extension Campus in Denison, home of the T. V. Munson Enology & Viticulture Center. She completed a program that usually takes 2 years in 1 year by earning her Associates of Applied Sciences degree in Viticulture and Enology at Grayson College in Denison, Texas and graduating with honors in December 2015. 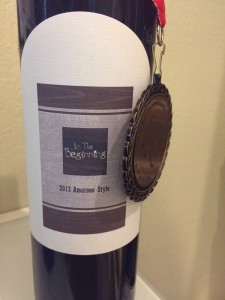 The Hartman’s entered the first wine they ever made together in the 2015 Texas Non-Commercial Wine Competition . Their Italian red blend was awarded a bronze medal in June. Scott gave it the clever name of “In the Beginning.”

KK also served for the first time as a judge for the Lone Star International Wine Competition, June 1 & 2, 2015, hosted in Grapevine, Texas by the Texas Wine and Grape Growers Association. She participated again in 2016, 2017 and 2018.

Starting with a very small harvest of 75 pounds of Tempranillo and even less Merlot and Syrah, in 2018, each year since then, the Hartman’s have harvested grapes of small and large quantities and have begun honing their harvesting processes and mentation methods by making practice vintages.

Despite some “mother” nature verses nurture new farmers lessons which came with set backs, such as needing to replace nearly all of the 2018 Tempranillo acre because of a crazy October 2019 early freeze which killed the very young vine’s future buds, they are moving right along in 2021. Scott has renovated a small barn which is now called the Wine Shack (think She Shed, but instead a She Makes Wine Shack) and the practice wines have been made inside the shack in 2020 and 2021. Mother nature struck again in 2020 and 2021 with late April freezes, so fruit was lost and crop yields were very low. But this vineyard lifestyle has proven to them, as is does to many others, “Its a marathon and not a sprint.” They formed Red River Wines and Provisions, LLC in 2021. So, eventually these two will be opening a winery in the Texoma AVA (American Viticulture Area), hopefully by 2023 or 2024 at the latest.